The domain model shows the Who of our new product; these are the physical and abstract nouns we identified in our stream of consciousness exercise.

This same design can be represented visually through a symmetrical domain model that shows that Shared and Foreign agents are a specialization of a Control Agent and that Recipient, Owner and Sender are all specializations of a User. Reading the model, we can see: 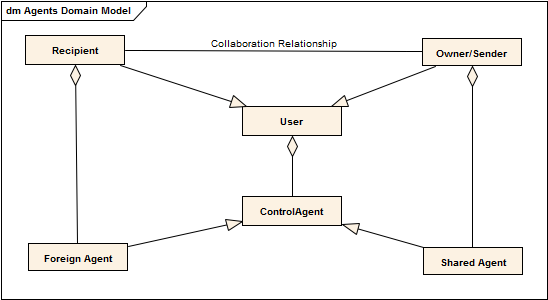 What is simpler to understand, the textual representation of Users and Control Agents described in the yellow box above or an illustration that has symmetry? You may not understand the technical system I built, but you can identify the simpler representation of the same Who relationships.

Here is how I defined the physical and abstract objects (the Who of my service). This diagram started as a simple relationship between four major components and evolved as more specialized objects were identified in the course of refining the workflows.

The diagram below is anything but ambiguous. Complex? Yes. Ambiguous, no.

Express Ambiguity through a Stream of Consciousness

Activity Diagrams for Use Cases