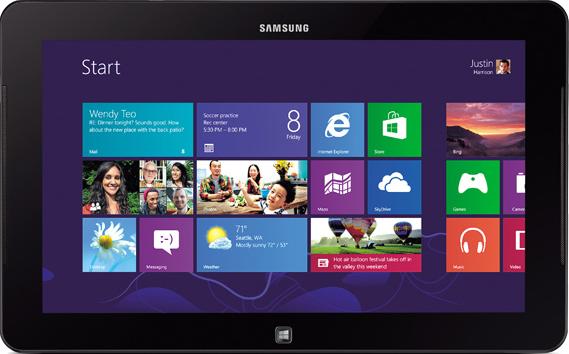 What is the difference between the different XE700T1C models, besides their price? The Samsung website and online support was no help.

In December 2012 I replaced my Motion LE1600 tablet with the Samsung XE700T1C ATIV smart PC.  Samsung offered four versions of this model but failed to explain the differences between them.  The Samsung website and marketing materials only provided cut-and-paste generic specifications for these four models.  Even Samsung's technical support group offered conflicting and erroneous information during my online chat with them.

After purchasing the -A04US model, I was surprised to learn that this most-expensive version lacks the detachable keyboard that comes standard with the seemingly-identical, lower-priced -A03US version.  To better understand what I purchased, here are the major differences between the models. (The -A02US model comes with a 32-bit version of Windows 8 and a slower 1.5 GHz CPU.  It won't be compared with the 64-bit tablets.)

The Windows 8 version, keyboard dock, TPM security, and the Intel 6235 WiFi chip appear to be the major differences between the XE700T1C-A01US and XE700T1C-A04US models.

The A04US model with a cellular wireless options is now available as Ativ Series 7 model HA1US. This newer model is available from AT&T wireless. Click here to read the review.

Out of frustration, I have started listing Samsung marketing confusions and technical issues about this Tablet PC.